We've been inspired by an awesome lupus warrior, and in celebration of Invisible Illness Awareness Week We have a NEW post I'd like to share with each of you! Too often we find many of us forgotten, looked over, treated as if we were invisible! It's time to shed the ignorance of others & bring light to our illnesses! If we don't spread awareness lovies, who will!? Enjoy the NEW post! It's guaranteed to spark some inspiration ♥ & as always don't forget to pass it on.

END_OF_DOCUMENT_TOKEN_TO_BE_REPLACED

The Different Types of Breast Cancer

Cancer isn’t black and white, especially when it comes to breast cancer. There are several different types that have different categories and it can be confusing. The following is a general guideline to help you sort through it all. Non Invasive Carcinoma Category: Non invasive carcinoma means that the cancer …

END_OF_DOCUMENT_TOKEN_TO_BE_REPLACED

I always wonder who will win this fight. ME VS. INVISIBLE ILLNESSES. I’m not going to lie – invisible illnesses seem to have the upper hand right now. But, this fight has been long and is hopefully nowhere near over! I know I need to start a different treatment regimen. …

END_OF_DOCUMENT_TOKEN_TO_BE_REPLACED

30 Things About My Invisible Illness You May Not Know ! 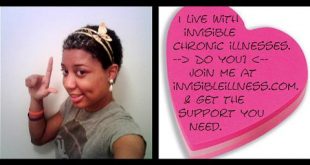 National Invisible Chronic Awareness week was created by Lisa Copen in 2002. She chose THIS year, 2010 for her "Each One Can Reach One" campaign which demonstrates how one person can help another, its completely anonymous unless the "do-er" chooses not to be. The beauty of it is that complete strangers are making a difference in the lives of those living with chronic pain! Of course I have to do my part and blogging for Invisible Illness is just one of them! I want to share some things about my own invisible illness that many of you may not have known. Knowledge is power lovies, and thats just one reason why we should all help to spread it! Each ONE can reach ONE!

END_OF_DOCUMENT_TOKEN_TO_BE_REPLACED

September was the month I was diagnosed with cancer. I had awakened with terrible abdominal pain in my stomach and took myself into emergency.  As soon as I arrived I was admitted.  They ran many tests and came in to tell me that I had a large abdominal mass and it …

END_OF_DOCUMENT_TOKEN_TO_BE_REPLACED

September 8, 2010 Living with an Illness Endometriosis 1

For some women, dealing with endometriosis feels like being in a state of perpetual PMS. For others, it becomes a game of Jekyll and Hyde during that time of the month. Or during ovulation. Or all the time. It is different for each woman but I would think that all …

END_OF_DOCUMENT_TOKEN_TO_BE_REPLACED

Your Spouse, Your Illness and You…

For so many of us, getting out of bed is a struggle. Fighting thru pain, physical complications and emotional stress round the clock takes its toll on us for sure but what about the toll it takes on our spouses? One of the biggest lessons I have learned in recent …

END_OF_DOCUMENT_TOKEN_TO_BE_REPLACED

Book Review/Tour: How To Be Sick by Toni Bernhard

I know that everything brought forth to this website is supposed to be original material, but I have stumbled upon something so great, that it needs to be shared with as many people as physically possible. As a result, here is the virtual book tour with Toni Bernhard – regarding …

END_OF_DOCUMENT_TOKEN_TO_BE_REPLACED

You’re pressed for time, so you pull into the drive-thru window of your fast-food restaurant and order the “healthiest” thing on the menu – a fast-food salad. After the “not so friendly” fast-food worker hands you a tray of lettuce and other fixings, you head back to the office to …